Bill Marlette was a long way from home, but he was willing to take the risk, as there were really no other options.

He was tired of the daily pain that made even shaking someone’s hand almost unbearable.
Marlette lost his arm in an accident when he was a teenager, but as an active kid, he didn’t this slow him down. He continued to play football and golf, running track and even wrestling.
But over time, the strain on his remaining arm and wrist took a toll.
So to relieve his pain, he traveled from Sioux Falls, South Dakota, to Munich, Germany, with the hopes that a special procedure using stem cells could make a difference.
“There’s no cartilage,” Marlette said of his wrist. “I’m bone-on-bone. It is constantly inflamed and very sore.”
As Marlette grew older, even the simplest things, like tucking in his shirt or putting on a jacket, became incredibly painful.

Marlette developed cysts and holes in the bones of his wrist. Doctors prescribed anti-inflammatory medications, but they only managed the pain, doing nothing to actually heal the problem. One day, his doctor, Dr. Bob Van Demark at Sanford Health in South Dakota, where Marlette works in finance, saw a presentation by Dr. Eckhard Alt.
It was about a new treatment using stem cells.
“Following an infection or wound or trauma,” Alt said, “there comes a call to the stem cells in the blood vessels, which are silent, and nature activates those cells.”
Stem cells are located throughout our bodies, like a reserve army offering regeneration and repair. When we’re injured or sick, our stem cells divide and create new cells to replace those that are damaged or killed. Depending on where the cells are in the body, they adapt, becoming specialized as blood cells, muscle cells or brain cells, for example. 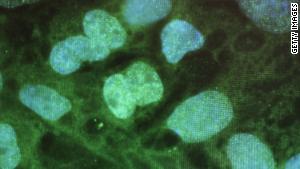 Alt was the first person to use adipose tissue, or fat, as a prime source of stem cells, according to Dr. David Pearce, executive vice president for research at Sanford health.
“He observed that the simplest place to get some stem cells is really from the fat,” said Pearce. “Most of us could give some fat up, and those stem cells don’t have to be programmed in any way, but if you put in the right environment, they will naturally turn into what the cell type around them is.”
Fat tissue has a lot of blood vessels, making it a prime source of stem cells, and Alt recognized that stem cells derived from adipose tissue are also particularly good at becoming cartilage and bone. 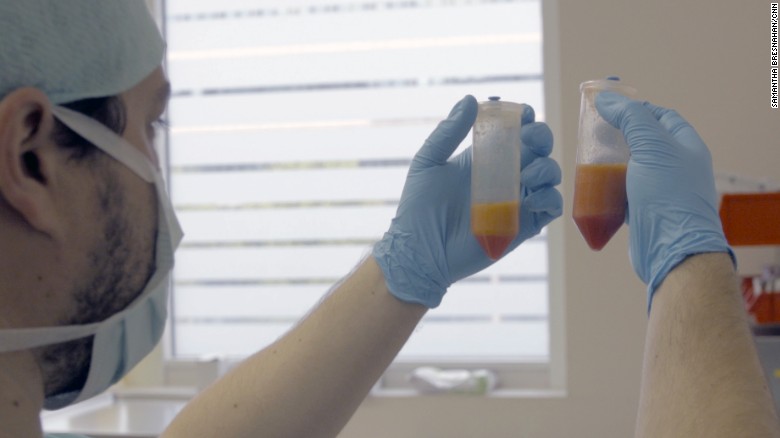 Stem cells are taken from fat tissue with a liposuction procedure. An enzyme mixture helps to separate the stem cells from oil and fat tissue, with the stem cells settling at the bottom of the vial.
Bone marrow is another source of stem cells, but these easily turn into blood and immune cells. Stem cells from fat have another fate.
“Fat-derived stem cells have a different lineage they can turn into, that is really cartilage and bone and other sort of connective tissues,” said Pearce. 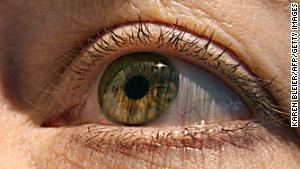 Van Demark traveled to Alt’s Munich clinic along with some doctors from Sanford, which is now partnering with Alt on clinical trials in the United States. Marlette’s doctor was impressed with what he saw and recommended the treatment to his patient.
Marlette paid his own way to Munich, where he would receive an injection of stem cells from his own fat tissue.
“I had one treatment, and my wrist felt better almost within the next couple weeks,” Marlette said. “Through the course of the next seven months, it continued to feel better and better.”
One injection was enough for this ongoing improvement.
“We see (from an MRI scan) that those cysts are gone, the bone has restructured, the inflammation is gone, and he formed … new cartilage,” said Alt. 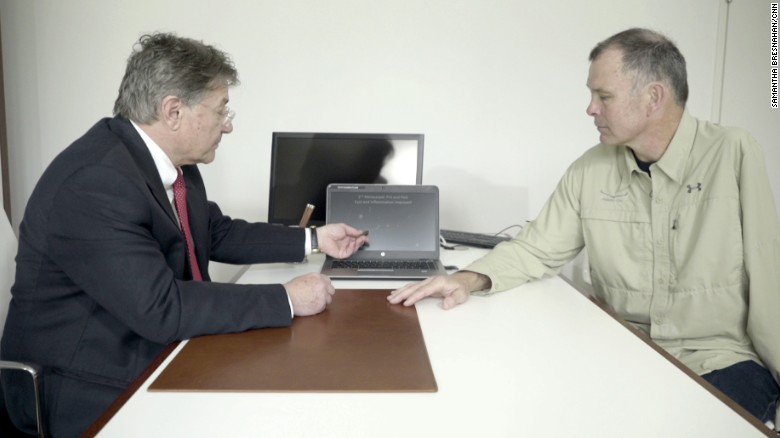 Bill Marlett with stem cell expert Dr. Eckhard Alt. (image above)
MRIs confirmed what he was feeling: The cartilage had begun to regenerate in his wrist. Because the procedure uses autologous cells, which are cells from the patient’s own body, there’s little to no chance of rejection by the body’s immune system.

Though the procedure worked for Marlette, the use of stem cells as a form of treatment is not without controversy or risk. In the US, they have been mired in controversy because much of the early research and discussion has been centered around embryonic and fetal stem cells.
Marlette traveled to Germany because approved treatments like this are not available in the United States. Clinics have popped up across the country, but they lack oversight from the Food and Drug Administration.
Dr. Robin Smith, founder of the Stem for Life Foundation, first began working in this field 10 years ago. According to Smith, there were 400 clinical trials for stem cells when she first started; now, there are 4,500. She partnered with the Vatican to hold a stem cell conference last year.
“We’re moving toward a new era in medicine,” said Smith, who was not involved in this research. “(We are) recognizing cells in our body and immune system can be used in some way — manipulated, redirected or changed at the DNA level — to impact health and cure disease. It is an exciting time.” 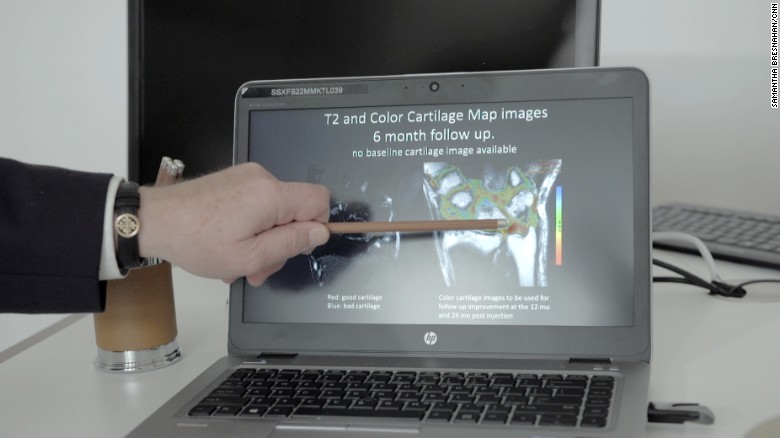 Dr. Eckhard Alt points out a spot on Bill Marlette’s MRI, taken after he received an injection of his own stem cells into his wrist. (image above)
Dr. Nick Boulis is a neurosurgeon with Emory University in Atlanta. His team ran the first FDA-approved clinical trials in the US to inject stem cells in the spinal cords of patients with ALS, better known as Lou Gehrig’s disease, and he isn’t surprised to see procedures like the one at Alt’s clinic in Germany have success. 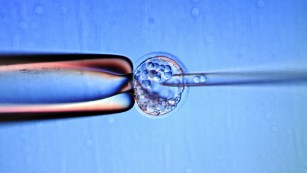 “Joints and bones heal,” Boulis said. “The nervous system is very bad at healing. It doesn’t surprise me that we’re seeing successes in recapitulating cartilage before we’re seeing successes in rebuilding the motherboard.”
Smith also cautioned patients to do their research, especially about the types of cells being used. “When you have a health problem, and you need a solution, sometimes you don’t have three five, seven years to get there,” she said, referencing the slow progression of regulations in places like the United States.
“So really ,look for places that have the regulatory approval of the country they’re in. Safety has to be number one,” she said.
Alt’s Munich clinic was approved by the European equivalent of the FDA, the European Medicines Agency. Through the partnership with Sanford, the health group is now launching clinical trials in America, focusing on rotator cuff injuries, a common shoulder injury. This is the first FDA-approved trial of its kind.
Further down the line, Alt hopes to see stem cells used for such issues as heart procedures and treating the pancreas to help diabetics. For him, the growth is limitless.
“I think it will be exponential,” he said. “It will be the same thing (we saw) with deciphering the human genome. The knowledge will go up exponentially, and the cost will go exponentially down. For me, the most exciting thing is to see how you can help patients that have been desperate for which there was no other option, no hope, and how well they do.”
For Marlette, it has meant a wrist free from pain and a life free from pain medication.
Since the procedure in August, he hasn’t taken any of the anti-inflammatory drugs. “I have more range of motion with my wrist, shaking hands didn’t hurt anymore,” he said. “My wrist seems to continue to improve, and there’s less and less pain all the time.”
By Samantha Bresnahan, CNN